I Wanted a Safe Workplace In Which I Could Transition Kathrynne • Indianapolis
“Fairness for All Hoosiers Act:” What Indiana needs March 30, 2015 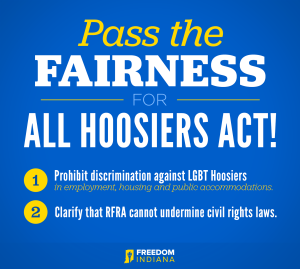 Governor Pence can’t answer the question on RFRA, but we sure can.

Today, Freedom Indiana is announcing legislation to fix RFRA and protect LGBT Hoosiers from discrimination. This legislation—the “Fairness for All Hoosiers Act”—is exactly what Indiana needs to begin rebuilding our reputation and undo the harm RFRA has inflicted on our state.

This common sense legislation would do two important things:

Tell your lawmakers and Governor Pence: Indiana NEEDS this legislation—and we need it now. Click here to urge the Indiana General Assembly to advance this bill to fix RFRA and protect LGBT Hoosiers from discrimination.

Since last week, Indiana’s economy and our reputation has suffered—in a big way. And for every second RFRA remains on the books in its current discriminatory form, the backlash will only worsen.

And Governor Pence didn’t do us any favors yesterday as he went on national TV and on five separate occasions was unable to answer the basic question: Should it be legal to discriminate against LGBT Hoosiers?

Ask a majority of Hoosiers that same question and you’ll get the same answer: Absolutely not. Discrimination isn’t a Hoosier value. That’s why it’s time for lawmakers to address the devastating impacts of RFRA—and ensure that at long last, Indiana is open for business to everyone.

Tell Indiana lawmakers and Governor Pence: It’s time to pass the “Fairness for all Hoosiers Act” and protect LGBT people from discrimination in Indiana. Click here to help get this bill passed now.

It’s pretty amazing to think that at this time last week, proponents of RFRA thought this was a done deal. But now, thanks to the movement you’ve helped to build, not only are we going to fix RFRA—we’re going to make history too.