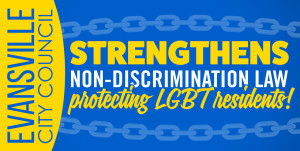 Last night in Evansville, the City Council voted overwhelmingly (7 – 2) to amend its existing HRO to expand and affirm non-discrimination protections for gay and transgender Hoosiers.

In the wake of State Legislature’s complete and utter inaction on legislation that could have expanded protections for LGBT Hoosiers statewide, local wins like the one last night in Evansville will be of the utmost importance in the coming months.

Our own campaign manager Chris Paulsen lauded the positive vote and reiterated the need for similar protections at the state level:

This is a big step in the right direction at the local level, but it’s also a continued sign that we need to have strong statewide protections in place.

Unfortunately, once [gay and transgender people] leave Evansville or any of the other cities and counties that have HROs, they’re once again subject to legal discrimination based on who they are.

While Evansville had an LGBT-inclusive HRO on the books previously, investigations into discrimination claims were voluntary. For example, if a gay or transgender Hoosier experienced workplace discrimination—they were legally able to submit a claim. However, in order for that claim to be investigated, the employee had to seek approval from the very employer whom they brought the discrimination claim against.

Last night’s vote will ensure that, not only is LGBT discrimination unlawful—but will in fact be punishable under that law should a gay or transgender Hoosier need to file a claim.

While we applaud the Evansville City Council and celebrate last night’s win for comprehensive LGBT non-discrimination protections, as Paulsen says this is only further proof that Hoosiers need a simple and uniform statewide solution to Indiana’s LGBT discrimination problem.

You can click here to contact your legislators and tell them to advance the simple solution—adding four words and a comma, “sexual orientation, gender identity” to existing civil rights laws—and finally address LGBT non-discrimination protections.