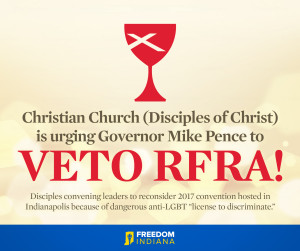 The economic consequences of the so-called Religious Freedom Restoration Act continue to pile up. Today, the Christian Church (Disciples of Christ) announced that leaders are now convening to reconsider holding its 2017 convention in Indianapolis should Governor Mike Pence sign the “license to discriminate bill” into law.

This is the second major convention to threaten to relocate in the last 24 hours. Just yesterday, Gen-Con—Indianapolis’ largest convention, which generates a $50 million economic impact each year—said it would consider other locations should RFRA become the law of Indiana.

Furthermore, today’s statement from the Christian Church (Disciples of Christ) underscores the fact that RFRA supporters do not speak for all people of faith. A wide array of faithful Hoosiers oppose SB101 because it’s a solution in search of a problem. Religious freedom is not under threat in Indiana.

Since Monday, more than 5,000 Hoosiers have called and emailed Governor Pence, urging him to veto this discriminatory, harmful bill. Click here to keep up the pressure—ask Gov Pence to stop RFRA now.