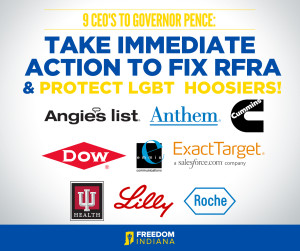 CEO’s of nine major companies have penned an op-ed to Governor Mike Pence, calling on him and Indiana lawmakers to take immediate action to fix RFRA and protect LGBT Hoosiers from discrimination.

The letter reads in part:

As we seek to attract and retain great talent from Indiana and around the world, it is critical that we make it clear that Indiana is the welcoming state we all believe it to be. As leaders in the Indiana business community, we call on you to take immediate action to ensure that the Religious Freedom Restoration Act will not sanction or encourage discrimination against any residents or visitors to our state by anyone.

By immediately enacting new legislation that makes it clear that neither the Religious Freedom Restoration Act nor any other Indiana law can be used to justify discrimination based upon sexual orientation or gender identity, our state’s elected leaders can provide the reassurance to the people of our state, our nation and the world that is needed at this critical moment.

Indiana’s business community has long opposed attempts to legalize discrimination against LGBT Hoosiers—and we thank these CEO’s for standing on the right side of history. For every second that RFRA remains on the books, Indiana’s economy and our people continue to suffer. Click here to tell your lawmakers it’s time to pass the Fairness for All Hoosiers Act to fix RFRA and update our state’s civil rights law to protect LGBT Hoosiers from discrimination.