It is fair. It is right. It is time! Krisztina Inskeep
Celebrating Victory In Lafayette With The Advocates Who Made It Happen September 15, 2016

On Sept. 6, the Lafayette City Council voted unanimously to update the city’s human rights ordinance to protect transgender residents and visitors from discrimination.

The council’s decision is the latest in growing trend. Since the state legislature passed the disastrous Religious Freedom Restoration Act in 2014, eight municipalities—including Lafayette—have adopted transgender-inclusive local protections. Tippecanoe County is poised to be the ninth: An ordinance that would protect transgender residents there passed unanimously last week in a preliminary hearing.

This victory was a long time coming. Lafayette updated its ordinance to protect people from discrimination based on their sexual orientation in 1993—making it one of the first cities in the state to do so. But local advocates never gave up on the fight to add protections against gender identity discrimination, a fight that kicked into high gear after the legislature failed again this year to make any meaningful progress toward applying LGBT non-discrimination protections statewide.

Rev. Kevin Bowers is one of those local advocates. He’s a pastor at Bethany Presbyterian, and used his voice as a faith leader to speak out in support of the ordinance during the hearing on Sept. 6. He testified to the Lafayette City Council that some members of his congregation are transgender, and he has heard from them stories of the pain, fear and ridicule they’ve faced because of their gender identity. He told the council he was called, as a Christian, do whatever he could to alleviate their suffering—and that includes advocating for an updating human rights ordinance. 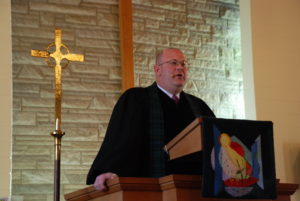 “The leader of the faith tradition of which I am a part is quoted as having said to his followers ‘whatsoever you do unto the least of these you have done unto me.’ This is an encouragement to his followers to look out for the well-being of all people, especially the most vulnerable among us. If those within our community who are afraid to leave their homes because of their gender identity are not among the ‘least of these’ then I don’t know who is. I believe this ordinance is an important step toward valuing the intrinsic self-worth of all people and honoring the image of God within them.

Bryan Bell, another local advocate who testified at last week’s hearing, addressed head-on a common fallacy that opponents of an updated ordinance frequently argue: That sexual predators will take advantage of the law to commit crimes.

This, he testified, is simply flat-out false. Before Lafayette’s vote last week, there were already 18 municipalities in Indiana offering transgender-inclusive nondiscrimination protections. These cities and towns exhibited a wide range of political and religious diversity, but they have one thing in common—none had experienced any increase in crimes related to updating the law.

The fact is, he said, sexual predators commit crimes that are punishable to the fullest extent of the law, and updating the human relations ordinance to include gender identity does not change criminal law in any way, shape or form. 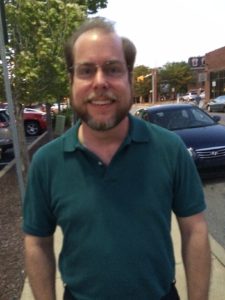 “Areas across the US have provided gender identity protections with essentially no negative consequences toward women and children in over 20 years. Since 1993 in Indiana there simply hasn’t been any incident of bathroom sexual predators dressing like women to get access to our women and children. This is a fallacy.”

Advocates for LGBT equality within Lafayette’s structures of government have also been working for years to update the local ordinance. These include Randy Studt, who serves as chair of the Lafayette Human Relations Commission. He has also served as an officer in Citizens for Civil Rights and Indiana Equality, two statewide groups working to update state laws to protect LGBT people from discrimination.

For Randy, efforts to pass local ordinances are stepping stones to updating statewide nondiscrimination laws, something that carries a heavy importance for him, personally: 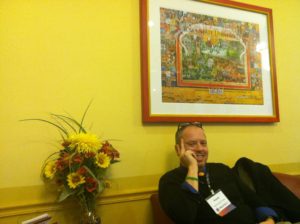 “In most of Indiana I could be fired, lose my housing or be denied service in a public place, because Indiana law does not protect me from discrimination or harassment. Indiana needs to add sexual orientation and gender identity to our civil rights code and overturn the effects of RFRA.”

Grassroots advocates like Rev. Bowers, Bryan Bell and Randy Studt are working over-time across the state to ensure that local laws fill the gap left by state government. But their work isn’t done yet, and they can’t do it alone.

Tippecanoe County’s transgender-inclusive ordinance goes up for a final vote on Monday, Sept. 19, and we know a vocal fringe group of opposition is already gearing up for a fight. 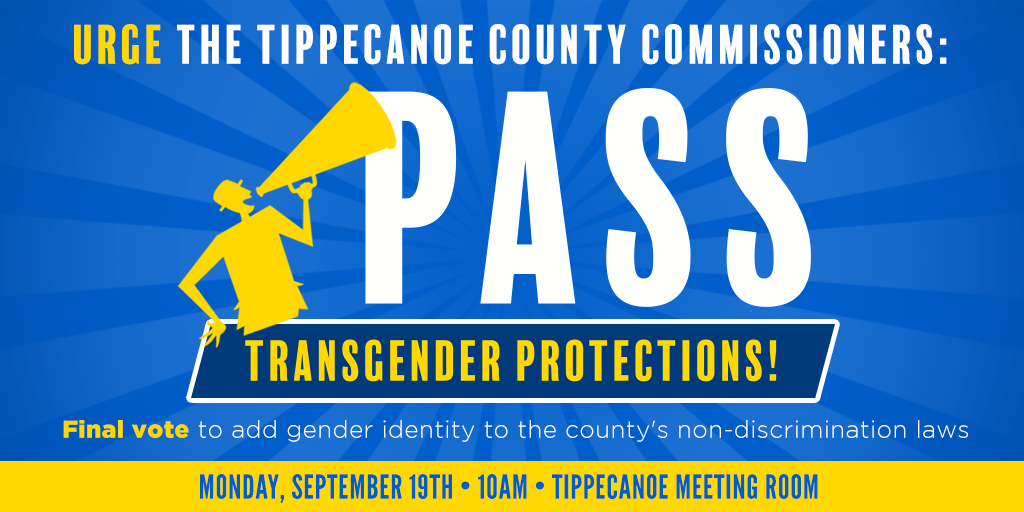 We need everyone in Lafayette and the rest of Tippecanoe County who supports this updated ordinance to turn out for that meeting. Click here to RSVP to attend.