Since its introduction several weeks ago, the Carmel City Council has delayed a vote on the city’s Human Rights Ordinance three times. Last night, however, City Council members finally took a vote and passed the LGBT-inclusive ordinance by a 4-3 vote of approval. 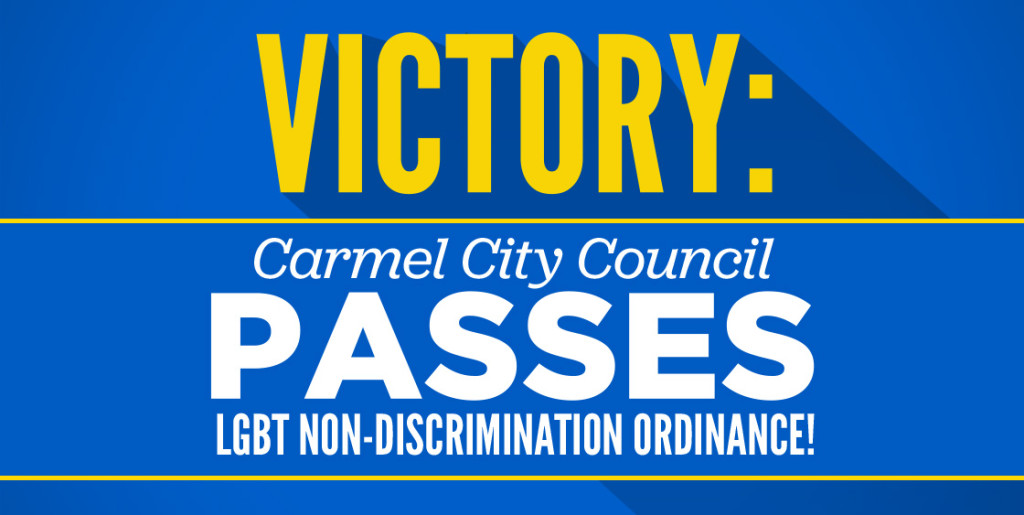 The ordinance extends non-discrimination protections in housing, employment and public spaces like restaurants, shopping malls and movie theaters to a number of classes, including on the basis of sexual orientation and gender identity.

The City Council heard hours of testimony from local residents and business owners at last night’s meeting and those held over the past few weeks.

Many supporters testified that the ordinance is necessary for repairing Carmel’s tarnished business reputation and making it economically competitive. Some cited a drop in business since the passage of Indiana’s so-called “Religious Freedom Restoration Act” in March amid national outcry from major players in the business community. Others testified to difficulties attracting and retaining quality talent, especially among millennials.

We applaud Carmel for passing a human rights ordinance that protects gay and transgender people and makes it clear that the city is open for business and open to everyone. The conversation about this ordinance spanned several months and included many different ideas. That’s a good thing, and we look forward to having that debate at the Statehouse in the upcoming session.

Ultimately, last night’s vote ensures that everyone in Carmel is treated fairly and equally – regardless of their sexual orientation or gender identity – and has the same opportunity to put food on the table, a roof over their heads, and to participate fully in the local economy.