A federal court with jurisdiction over Indiana, Illinois and Wisconsin just ruled in favor of employment nondiscrimination protections for gay and lesbian workers—and we have a Hoosier to thank for it. 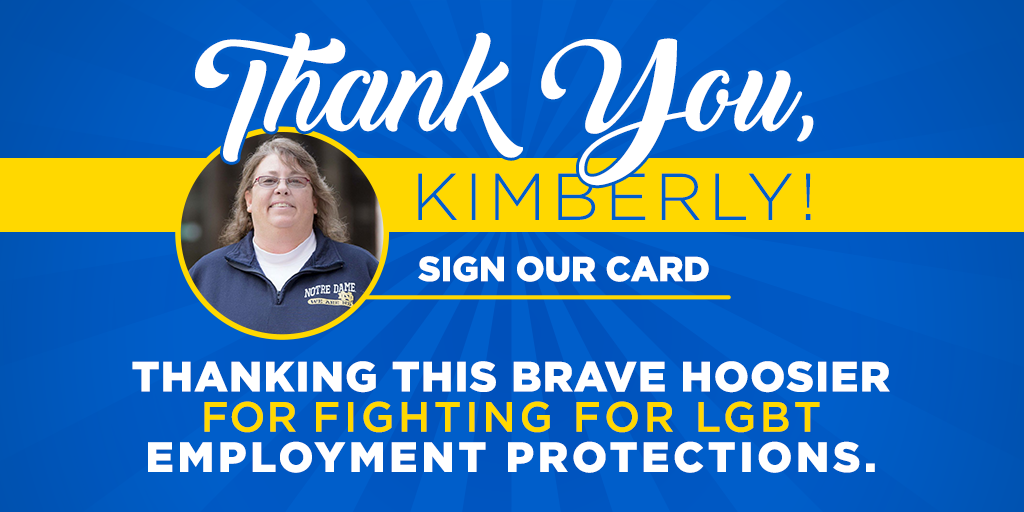 The U.S. Appeals Court for the Seventh Circuit affirmed today that Title VII of the Civil Rights Act of 1964 protects workers from being discriminated against because of their sexual orientation. The landmark ruling comes in Hively v. Ivy Tech Community College, with the Court finding 8-3 that Ivy Tech illegally discriminated against Kimberly Hively when they denied her full-time employment because she is a lesbian.

The 7th Circuit Court of Appeals is the highest court to ever rule on this issue and could send shockwaves through the legal system. But the case would have never been heard in the first place if this brave Hoosier and her legal team at Lambda Legal had not fought back when faced with discrimination.

She deserves our thanks. Click here to sign our card congratulating Kimberly and her legal team for today’s historic victory.

Chris Paulsen, Freedom Indiana’s campaign manager, congratulated Kimberly on today’s monumental victory and noted that the fight for LGBT equality in Indiana is far from over:

“We congratulate Kimberly Hively for speaking up and fighting back when she faced discrimination. Because of Kimberly’s bravery, lesbian and gay Hoosiers are closer today to securing protections from discrimination in the workplace. This is an important step that affirms so much of what we’ve been fighting for over the last few years.”

“But this is by no means the end of the road—in fact, our work to secure comprehensive nondiscrimination protections for all Hoosiers is now more important and more urgent. We believe in an Indiana where everyone—regardless of their sexual orientation or gender identity—can go about their day without fear of discrimination. Adding sexual orientation and gender identity to Indiana’s civil rights law is the best way to achieve that reality, and we’re moving forward with more determination than ever before.”

Adding four words and a comma—“sexual orientation, gender identity”—to our existing civil rights law is still the best way to ensure all Hoosiers are protected.

If you agree, sign our letter to lawmakers urging them to take action during the 2017 legislative session.