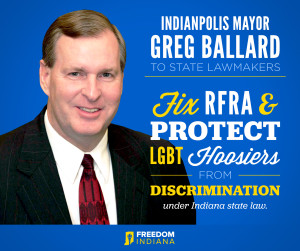 Republican Indianapolis Mayor Greg Ballard came out forcefully against the so-called Religious Freedom Restoration Act (RFRA) and called on state legislators to fix the law to ensure RFRA cannot be used as a “license to discriminate” against gay and transgender people.

Today during a press conference at the City-County Building and in front of a group of civic and business leaders, the Mayor said, “(RFRA) is wrong and I hope that message is being heard loud and clear at our Statehouse.”

Ballard then called on the General Assembly to include sexual orientation and gender identity to state civil rights protections. He noted that he had already reached out to the NCAA—which is holding the Final Four tournament in Indianapolis this coming weekend—to reassure them that Indianapolis is a welcoming city and that he remained committed to fighting the law.

If Indiana passes a bill to ensure that RFRA cannot be used to undermine current state civil rights law and Indiana’s civil rights law is updated to include sexual orientation and gender identity—only then could we maybe stop this bill from becoming a “license to discriminate” against gay and transgender people in Indiana.

Nevertheless, the bill would still open up the state of Indiana to a whole host of problems, from frivolous lawsuits, to concerns over public safety, to a weakening of domestic violence laws. But Mayor Ballard’s endorsement to a common-sense fix to RFRA is a step in the right direction.

Ballard hasn’t shied away from publicly opposing RFRA before. Prior to RFRA being signed into law by Governor Pence, Mayor Ballard issued the following statement voicing his opposition:

“I had hoped the Statehouse wouldn’t move in this direction on RFRA, but it seems as if the bill was a fait accompli from the beginning. I don’t believe this legislation truly represents our state or our capital city. Indianapolis strives to be a welcoming place that attracts businesses, conventions, visitors and residents. We are a diverse city, and I want everyone who visits and lives in Indy to feel comfortable here. RFRA sends the wrong signal.”

Since Governor Pence has signed RFRA into law, the reaction from major businesses and organizations has been swift and severe—with Yelp, Salesforce, Angie’s List, The NCAA and The NBA publicly condemning the law. Meanwhile, Gen Con, the largest convention in Indianapolis, announced that they were reconsidering their plans to hold their 2017 convention in the state—taking millions of dollars with them.

It’s clear from today’s press conference and his previous statement that Mayor Ballard sees the writing on the wall—RFRA is bad for business and bad for the state. Now we can only hope that our elected leaders in the General Assembly will take note and fix this terrible bill. Because if they don’t, Indiana, and the city of Indianapolis especially, stand to lose millions of dollars in investment and thousands of jobs.