I Wanted a Safe Workplace In Which I Could Transition Kathrynne • Indianapolis
A Complete Letdown: In State of the State, Governor Pence Fails to Lead on LGBT Non-Discrimination January 13, 2016

Tonight during his annual State of the State address, Governor Mike Pence was still unable to address one simple question: Should it be legal to discriminate against LGBT Hoosiers in Indiana because of who they are. 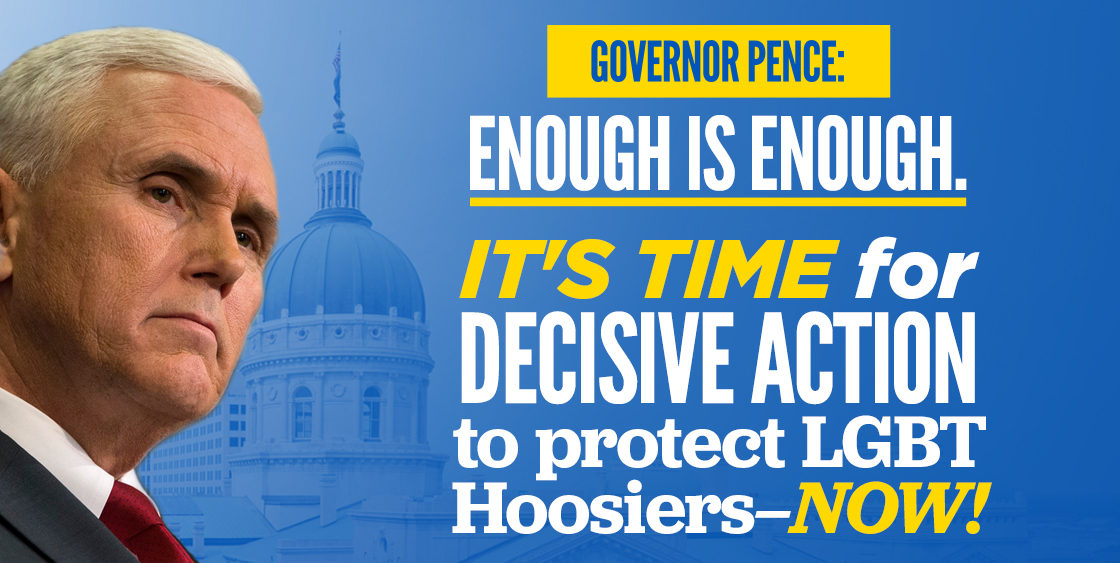 Already, in the wake of him signing the so-called Religious Freedom Restoration Act (RFRA) into law last year, Governor Pence has failed to answer this question—even when asked five times on the national stage in an interview with George Stephanopoulos.

For the past 10 months, the Governor has continued to dodge the question, saying that he was “studying” the issue of civil rights protections for LGBT Hoosiers.

And still tonight, in his State of the State address, the Governor put forth absolutely NO decisive action to address the discrimination faced by gay and transgender Hoosiers across the state. It’s high time for Gov. Pence to own up to his actions—and take necessary steps to fix the problem of LGBT discrimination in Indiana.

Our Campaign Manager Chris Paulsen responded to the Governor’s disappointing lack of leadership:

“This is a complete letdown. In his speech tonight, after 10 months of allegedly listening to Hoosiers, Governor Pence chose to punt the critical issue of civil rights protections for gay and transgender people to Indiana lawmakers. We are disappointed in his lack of leadership on an update that we know a majority of people in our state support.

“But it also means we have our work cut out for us: We must redouble our efforts so that lawmakers craft a good bill to send to the Governor that makes it clear that gay and transgender people should not be fired, denied housing or turned away from public spaces because of who they are or whom they love.

Join hundreds of Hoosiers who are speaking out against Governor Pence’s inaction tonight. Call Gov. Pence now at (317) 232-4567 and tell him: Your actions do not represent me or a strong majority of Hoosiers who support fair and equal treatment of LGBT Hoosiers. Then let us know how your call went.