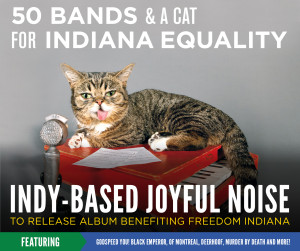 A group of 50 bands (and a cat) are coming together in support of gay and transgender Hoosiers with a new compilation called “50 Bands & a Cat for Indiana Equality.”

The compilation from the Indianapolis-based Joyful Noise record label features bands including Godspeed You! Black Emperor, Thurston Moore, Thee Oh Sees, Ought, Of Montreal, Lou Barlow, Protomartyr, Murder by Death, Deerhoof, the Jesus Lizard’s David Yow, Oneida, Son Lux, Serengeti, WHY?, Surfer Blood and many more. Many of the bands have contributed unreleased songs to the compilation. The full list of bands is here.

These artists are among many musicians and labels that have spoken out against Indiana’s Religious Freedom Restoration Act (RFRA), which was signed into law by Governor Mike Pence on March 26. The bill gave businesses the license to discriminate against gay and transgender Hoosiers on the grounds of religion, until in response to public backlash, the legislature revised the bill to make clear it could not be used to undermine existing non-discrimination laws,

The cat, Lil Bub, made a statement in honor of the compilation:

Thank you for supporting this creative musical endeavor, brought to you by my beautiful and talented Indiana sisters and brothers, and our many friends. When planning my intergalactic journey to planet Earth, I specifically picked Indiana for my home because of its humbleness, hospitality, and the warmth and love of its people. Indiana is where I was rescued, it’s where I found my family, and it’s where I made my closest pals. Everything I have accomplished in my 3 years as the most famous and inspirational cat on the planet has its roots firmly planted in the soil of Indiana, and has blossomed from the hearts, hands, and minds of its people. Without my Indiana compatriots, I would not be where I am today.

Despite the unfortunate decisions of Indiana’s lawmakers, the true people of Indiana are some of the best people on the planet. This project serves to celebrate those people and their talents, and to make it clear that we firmly believe in equality and acceptance, and won’t stand for anything less in our state, or on this planet.

For $25, customers will receive 51 tracks plus one hand-made 7” that includes a song of choice. All profits go to Freedom Indiana, the ACLU of Indiana and Indy Pride.

Make sure to purchase an album now to show your support for freedom for all Hoosiers, as well as add some high-quality tunes to your repertoire.